In late 2015 and early 2016, anything that wasn’t nailed down sold. The Sunshine Coast was at bargain basement prices and the deals were too good to ignore for lower mainland investors; perhaps including ‘pre-sale’ contract flippers and money launderers (been reading the ugly news stories involving the BC Liberals?) I was seeing some weird shit in some development pre-sales at this time and now I think I know why.

But it all came to a screeching halt by May 2016 - this was 2007 all over again. There were no more bargains and the multiple offers and hundreds of buyers dried up. Oh, there were still a few stragglers suffering from “fear of missing out” (FOMO); but, now their two year variable rate mortgages are coming up for renewal at higher interest rates and the banks may turn them down if they can’t pass the “stress” test which will go up, too, following this past Tuesday's Bank of Canada’s rate increase. Of course, the plan was never to renew but to flip after two years (got to keep an eye out for the Canada Revenue Agency). But, to add insult to injury prices are dropping across the board - big time. You’ll see that in my 2018 posts. 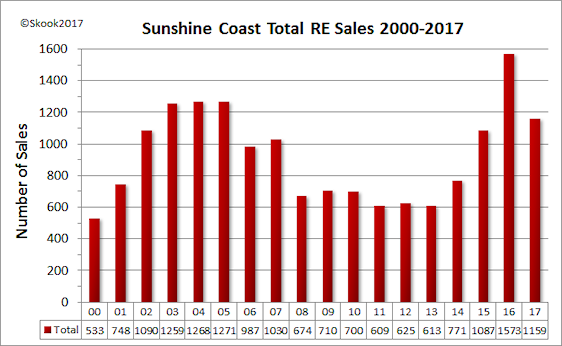 Mirroring the Lower Mainland, attached sales picked up as detached sales waned. A few new small developments came on stream, but inventory is now low and prices high. 2018 “year-to-date” condo sales are down -28.6% compared to the same period in 2017 and townhouse sales have slipped -12.5%. 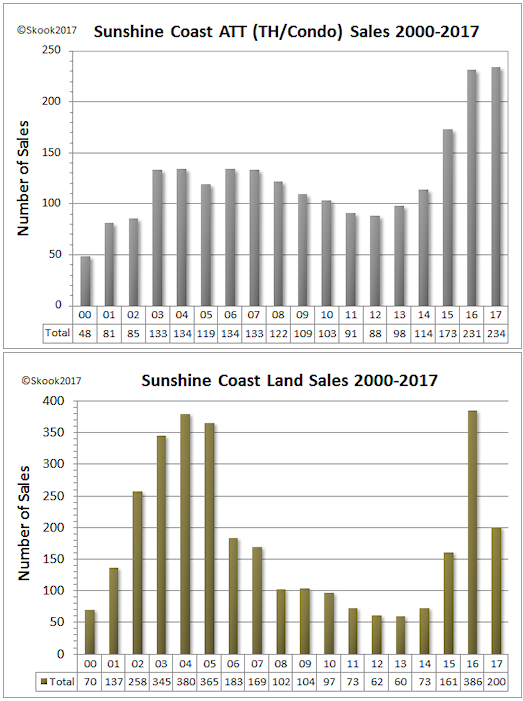 Land sales went ga-ga in 2016 and then dropped -48.2% in 2017; again, because all the “dirt-cheap” lots were gone. More than a few lots were snapped up by small, independent home builders. Unlike the last boom in the early 2000s, there haven’t been big development projects like Trail Bay Estates. There are some projects given the green light recently but they may slow down given the volume of price drops and relists on MLS. 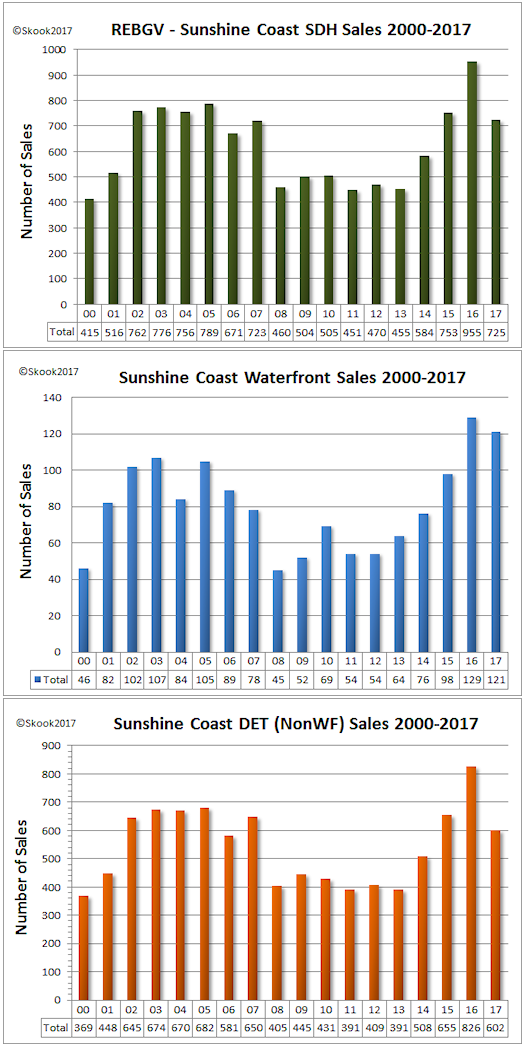 I first took a stab at trying to figure out detached sales versus the 10 year average back in 2015. I said I wasn’t sure if I got it right and I’m still not sure, but the tables look good.

Sales in 2017 were a respectable +23.7% above the 10 year average and can be seen in the table above and chart below. 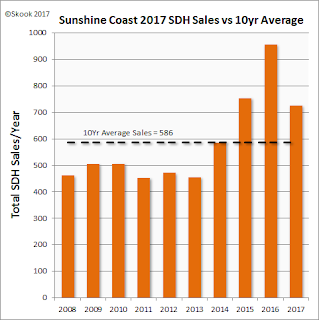 Finally, here’s an in-depth breakdown of RE sales from 2011-2017 courtesy of SC Realtor Gary Little. Every year Little has posted a .pdf file at the top of his sales stats webpage comparing year-end sales with the preceding year. I took those figures and put them into a table which I’ve updated each year. Now, I was going to give a link to that .pdf but it’s gone and I can’t find it anywhere on his website. Little use to post a mid-year sales update at the beginning of July, but not this year. This is really unfortunate. 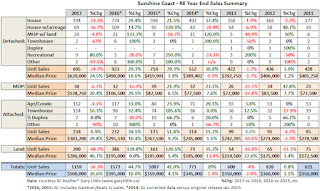 (To view in its original size, right click on the image and open in a new tab. You can then easily move back and forth between the the image and blog.)

Other than Little, there is no SC Realtor posting their own sales stats.  Kenan MacKenzie has been hit and miss with his monthly summary posted to his blog. I just realized that summary is no longer included in the Coast Reporter Real Estate Weekly section - when did that happen? Ugh, I’ve been living in a fog these last few years. MacKenzie’s summaries don’t have the verve they once did - he used to be so enthusiastic in his prognostications.  Well, I did have to give up the Bénédictine and scotch which didn’t help. Maybe MacKenzie is edging into retirement - wouldn’t blame him.

Patrick Hobbs has posted a Weekly Report on his Facebook page but it’s hit and miss - last report was posted April 17.

Russ and April Qureshi offer a few stats on their blog page (scroll down).

If, Realtors do post any stats it tends to be the REBGV monthly “Realtors Report” or a link to REBGV Monthly Stats Package download page.

It’s best if everyone is on the same page, right?