About the Sunshine Coast (SC)

There are four governing bodies on the Sunshine Coast: Town of Gibsons, District of Sechelt, Sechelt Indian Band (SIB) and the Sunshine Coast Regional District (SCRD). All communities outside of Gibsons, and Sechelt are located within one of five designated areas and every three years residents within those areas elect a Director to represent them on the SCRD Board. Sechelt and Gibsons Councils appoint one of their members to the Board as does the SIB.

It is the eight member SCRD Board that rules on any development issues outside of Sechelt, Gibsons, and SIB reserve land. In the past, the Mayors of Gibsons and Sechelt and the SIB Chief represented their communities on the Board. I am not sure when that changed, but I have a feeling it had to do more with workload then politics. With all the development issues on the coast over the last ten years, the SCRD was kept very busy.

The map below shows how the Sunshine Coast is divided up. Below it, I have included a table showing the population growth in all areas, as well as Gibsons and Sechelt. The SIB stands at 797 according to the 2011 Census and that figure is included in the 2011 total Sunshine Coast population (28,619). 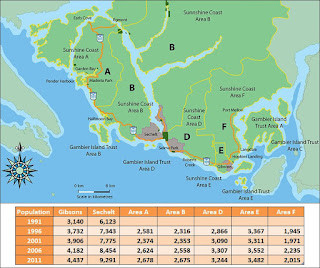 Let's take a quick drive up the coast starting in the south. When you get off the ferry, you are in:

Enter into the District of Sechelt (39 sq km/15.1 sq mi)
Into Area B: Halfmoom Bay (1,275 sq km/492 sq mi)
Finally, Area A: Egmont and Pender Harbour (1,901 sq km/734 sq mi)
Oops, we passed Go and forgot to 'pay' our $200 so its back to the Sechelt Indian Government District which is that big dark green box on the map next to Sechelt's little waist - remember we had to drive through it on the highway. The Band has other lands on the coast and you can see those small dark green holdings scattered throughout the map above. The SIB was the first Band in Canada to become self-governing in 1986; it has clout and you entered shíshálh Nation Territory the moment you left Elphinstone. The map below shows the extent of their territorial claims. The southern end of the SC is in the traditional territory of the Squamish Nation.