On Oct 3, I posted the December 2015 data for million dollar home sales on the Sunshine Coast. Sales in 2015 were the best in years. They picked up in May and didn’t look back ending the year with double the 2014 sales.

With last year’s sales in mind, I would like to introduce you to Jonathan Baker. He is the human element in the March 3, 2016 Bloomberg piece ‘Millionaire Boomers Decamp Vancouver Pocketing Housing Windfalls’ which was reprinted the next day on March 4 in the Vancouver Sun with a slightly expanded, emotionally packed header: ‘Millionaire boomers decamp Vancouver pocketing housing windfalls as city becomes a ‘commodity’’ (Skook: seriously...who writes this stuff?). There is a Sunshine Coast connection to Mr. Baker and because of that I'm posting the complete article.

Jonathan Baker is the first to admit he shouldn’t be complaining about foreign investors driving up prices in Vancouver’s red-hot housing market. They helped the retired lawyer pocket millions.

Baker and his wife sold their five-bedroom home for $3 million in December, a 100-fold gain from their purchase price in 1970. The house went for $300,000 over asking after an offshore investor bid up the price and was later flipped several times to other buyers. Now the home sits empty in Dunbar, the tell tale sign of a buyer who lives abroad, he says.

“You can’t be too critical when you’ve benefited from it,” Baker, 78, said by phone from his 4,200-square-foot, $1.5 million seaside home in Sechelt, bought using proceeds from his Vancouver sale. “But the city has become a commodity. One group like myself has bought early, we were lucky. But we no longer knew our neighbours. It’s empty.”

Baker’s generation is cashing out as an influx of foreign demand pushes up the average detached home price in Vancouver to a heady $1.8 million. They’re taking the profit and injecting it elsewhere, exporting higher prices to retirement enclaves across the Canadian province. That’s pushing up sales and price growth in these small towns beyond even Vancouver’s torrid pace.

“All these prices are crazy — it really is crazy,” Baker said. “I can’t imagine this thing continuing.” That’s why he sold last year, fearing a rapid price drop if offshore demand dries up
.
Seniors are moving from Canada’s third-biggest city at a record pace, with 2,322 people over the age of 65 leaving the city for other parts of B.C. in 2014, tying with the prior year as a record high, according to preliminary data from Statistics Canada. That’s coincided with a jump in home sales and prices where they typically settle.

The dynamic is also seen in Canada’s number one retirement hub: Qualicum Beach, the town of about 10,000 people on Vancouver Island. Half the residents are over 65, the highest proportion of any city in the country, according to Statistics Canada. Home sales in that area and nearby Parksville, the No. 2 retirement haven, almost doubled to 63 transactions in January from the year ago period, and the average price of a home is up 24 per cent to $444,856 over that time.

Baker’s home is in Sechelt, the fastest-growing retirement community in Canada according to Statistics Canada. The inflow of residents aged 65-plus increased 7 per cent in the last five years, the most of any municipality in the country, bringing that aging population to over a third of its 10,000 residents.

The quiet town now faces big-city housing issues: construction, bidding wars, and never-before-seen prices and sales. Prices jumped 42 per cent to a record $510,839 in January from the prior year, according to MLS data compiled by Gary Little, a realtor who’s been selling real estate along the Sunshine Coast for a decade. Sechelt broke sales records last month, with 99 residential sales in February, the highest ever for that month and the second highest on record after 117 in June, the data show.

Activity in Qualicum Beach and Sechelt has been so frothy it surpassed Vancouver, where sales rose 32 per cent in January from last year and the benchmark price of a single-family home like Baker’s is up 26 per cent in the same period. In the last five years, the average price for a detached Vancouver home has nearly tripled to $1.8 million in February, with data released Wednesday showing a record sales pace for the month as transactions jumped 36 per cent to 4,172 deals. 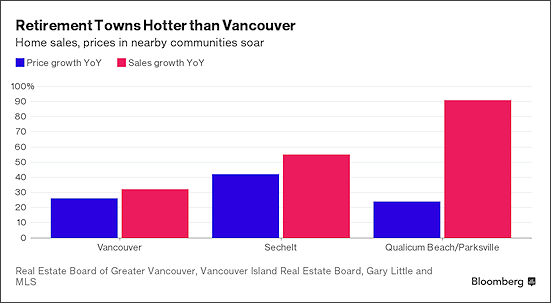 “It’s just been startling,” said Little. “People are coming in from the Lower Mainland area and they do have money. They are cashing out there.” There are also more Vancouver agents coming into town with moneyed clients, snapping up properties, land parcels and buying homes over the asking price, he said.

The sky-high home costs in Vancouver have a downside — some retirees can’t afford another roof over their head in the city after selling.

“I can’t afford to stay here anymore,” said Linda MacAdam, a 69-year-old who recently sold her century-old Vancouver home with an unfinished basement and second story for $2.7 million. Buying another home in the city, plus the higher living and travel expenses would consume that windfall quickly. “Retirees are depending on this wealth from their houses as retirement income, but this extreme wealth has only happened in the last three years.”

She’s now looking for a home in Victoria, something private, close to theatres where she plans to treat friends with show tickets, and near the water so it’s easier for her to sail.

“It’s just a fluke,” MacAdam said, in the midst of preparing for a weekend trip to a nearby island with friends. “I’m never going to use all that money.”

Money aside, for the life of me I can't understand why anyone in their late 70's would want to buy a honking 4,200sf home. Well, they've obviously got enough money left over to pay for a groundskeeper and housecleaner. Their former Dunbar home looks fairly large so I guess they like space and they can accommodate visiting family. Besides, I'm sure they are looking on this new home as a further investment.

Speaking of investments, they sold for $3mill and bought for $1.5mill. I wonder what they did the rest of the windfall? Did they invest in more Sunshine Coast homes? They could've grabbed two in the $400,000 range. Or, maybe they split it up and gave it to the grandkids for downpayments on their Vancouver dream homes.

This story is a perfect illustration of the impact of rising Vancouver house prices on outlier areas. Sellers cash out and move into cheaper markets, as inventory is depleted prices rise.

Now, let's see if that story had any impact on Sunshine Coast sales...stay tuned.
Posted by Skook at 10:24 am