For the second year, Bowen Island mother and son Realtors® Dee and Frazer Elliott have released a year-end sales summary. It was posted to their Facebook page back in January. The images below were taken from that summary with the chart on the left showing 2015 home and lot sales month-to-month and the chart on the right showing total sales year-to-year going back to 2007.

The Elliott summary had a few other interesting tidbits. They reported that, “Many of our clients were first time buyers looking for homes below $750,000. Bowen’s lifestyle and relative affordability when compared to Vancouver were the driving factors.” They went on to add that, “During the year we saw an increase in recreational property sales and a greater interest in investment properties when compared to the past few years. This applied to bare lots as well as homes.”

I went back into my own BI files which has home sales data going back to 2004 so I put together my own chart. The only year missing was 2013 (I had total sales for the 1st, 2nd, and 3rd quarters but no year-end figure); but, after a google search, I managed to get that total via a February 12, 2014 Bowen Island Undercurrent piece, “Home sales increase, property values keep sinking”. 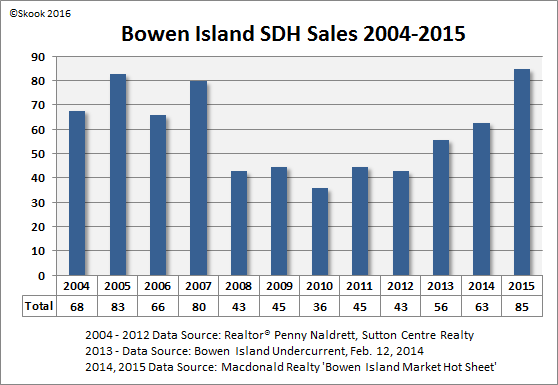 The chart shows the real estate boom of the early 2000s which reached its peak in 2007 (same pattern on the Sunshine Coast) followed by a stunning collapse as the US economy and stock market tanked due to the US housing collapse and subprime mortgage debt fiasco with the latter leading to a world-wide financial crisis; however, as BI house sales tanked the MLS® HPI Benchmark Sales Price continued to rise. It was in 2010 that the sales low and benchmark high met: total house sales – 36, peak benchmark - $625,500 and then the two reversed paths. As sales slowly began to come back, the benchmark sales price began a descent that bottomed out at $555,300 in May, 2013 – that’s almost a two and a half year lag. That lag is a point worth remembering.

The realtors® quoted in that BI Undercurrent piece above saw 2013 as the turning point for island sales. The primary reason: lower mainlanders influenced by price.


“There is a major affordability factor here compared to Vancouver that makes it seriously appealing. You can own a home or land for the fraction of the price. You just have to be willing to make a lifestyle adjustment. At some point, Metro Vancouver's going to get in on our little secret.”

Coupled with price was a mindset change with Bowen now “being considered a suburb of Vancouver” in line with Maple Ridge, Abbotsford and even Squamish.

I asked myself at this point, “Was there a specific event that caused this movement to the burbs?” and, if so, “How can I chart this?” Well, in my opinion there was an event and the chart already exists. Have you ever visited Brian Ripley’s website? If not, you should because the man’s chart-making ability is amazing. He’s created a Vancouver Housing chart that plots the benchmark sales price, total residential sales listings and sales from 2001 to 2016.

I took a portion of that chart and superimposed the BI benchmark chart line so you could see how they progressed in relation to each other.  At the beginning of 2012, the Greater Van’s benchmark dramatically spiked, peaked in April and then fell until January 2013. I think this small boom and bust, initiated by change in the HPI benchmark formula, rattled home owners coming so soon on the heels of the 2009 price crunch.

However, if you look at the table on the right below you will notice that the average sale price bottomed out 6 months before and was now on the rise even if a little erratic. So, I think more than a few Greater Van homeowners, especially those retired, decided to cash out and move to cheaper, nearby markets and Bowen Island fit the bill. The table shows BI average and benchmark sale prices were continuing to drop into 2013 with the benchmark bottoming out at $555,300. Unfortunately, I can’t give you a total BI benchmark price drop because the REBGV only began separating BI from West Van data beginning January 2012; however, below the table are the yearly BI average home sale prices from 2005 to 2016 and the peak was reached in 2010 at $815,231. Just for fun, taking that average price high and benchmark low gives a total sales price drop of -31.9% - it likely about 6% points lower; either way, at this time there was definite angst amongst home sellers trying to unload. 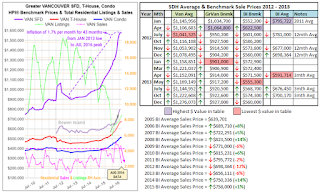 The impact of falling property values on BI is aptly illustrated by this Dec 10, 2013 blog entry for “Court Ordered Sales” on a West Van realty site:

Its little wonder given all of the above BI sales would take off in 2013.

The following REBGV charts illustrate the path taken by sales and listing inventory from Jan 2006 to Aug 13, 2013. The bottom chart interestingly breaks down inventory by price range. It should be noted that these are all 12 month rolling data charts. 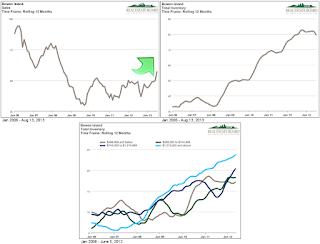 I confess that although I’ve come across “rolling” data charts before I haven’t gone out of my way to understand their purpose until now. Here’s an explanation that I found on one business website:


“A Rolling 12 Month Trend report does not sound too exciting but it is a valuable tool for any organization to use to track its progress and to show trends. Essentially, it is a report that uses the running total of the values of last 12 months of an indicator. Each month, the indicator that is 13 months old is dropped from the total and the new month’s indicator value is added.”

I decided to see for myself how this “rolling 12 month trend” worked so I prepared my own tables and charts beginning with BI’s monthly detached home sales from January 2004 to August 2016. The frenetic chart resulted from plotting those monthly numbers. This is what happens in a very small market where sales go from a low of 0 to a max of 17. However, if you sit back and squint you can see the trends. 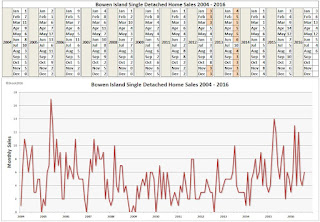 I added some key economic events to the chart that influenced those peaks and troughs in sales (US Housing Crash, US Stock Market Crash, Peak Oil, and the green shaded period of US recession). Also, I indicated changes to the Bank of Canada key interest rate which affects both savings (due to interest paid by banks) and variable home mortgage rates (due to interest charged by banks); and, since both are next to nil they’ve played pivotal roles in the current housing bubble. 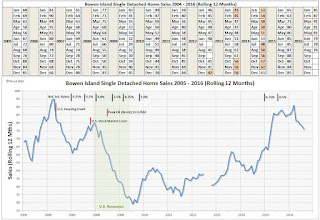 Speaking of interest rates, here’s a table and chart showing the damage that you can keep for easy reference. 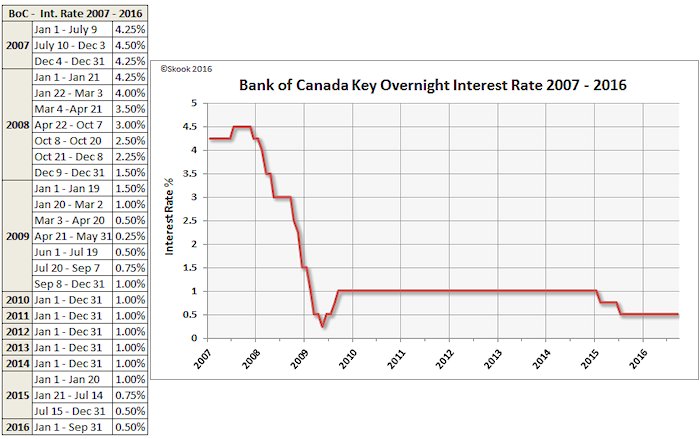