I strongly recommend you take a quick look at my early 2016 Stats post - click on ‘SC - 2016 Sales Stats’ in the Labels column to the left. Stats Post #2 is especially important to read regarding a Bloomberg article that appeared March 3, 2016 and was reprinted the next day in the Vancouver Sun. The piece is about retired Vancouver lawyer Jonathan Baker who sold out in Vancouver and  moved to the Sunshine Coast - “pocketing millions” in the process. You want to keep the date of that article in the forefront of your mind as you look at these ‘$1mill plus’ single detached home sales and all other 2016 stats I will post in the days ahead. 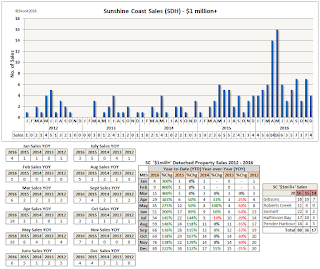 (to enlarge image, right click and open in a new tab or window)

It is interesting to note the Van Sun’s headline to the article: ‘Millionaire boomers decamp Vancouver pocketing housing windfalls as city becomes a ‘commodity’. Well, I think as I post the 2017 stats, we’ll see the same modus operandi on the Sunshine Coast. At last, the SC has reached Vancouver Burbhood - something I anticipated while looking across the Skookumchuck Narrows one day back in 2005. All that’s needed now is the Fixed Link (land bridge) to complete the process and the unique character of the SC will be gone forever. It was inevitable, but sad nevertheless.
Posted by Skook at 12:53 pm