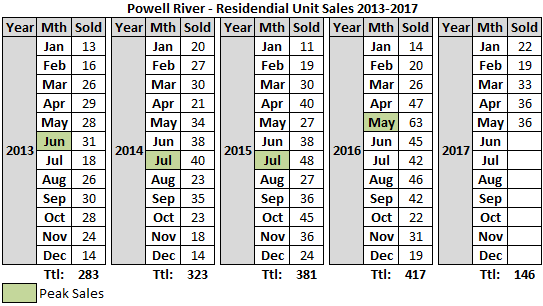 “A Rolling 12 Month Trend report does not sound too exciting but it is a valuable tool for any organization to use to track its progress and to show trends. Essentially, it is a report that uses the running total of the values of last 12 months of an indicator. Each month, the indicator that is 13 months old is dropped from the total and the new month’s indicator value is added.

Why use this trend report rather than looking at the actual values? Well, the actual values are important for many reasons but they do not show any trends that can point to growth, flattening or decline.”

(Another excellent explanation with example can be seen here.)

So the trend chart shows sales peaked in Sep 2016, went into decline, had a dead-cat bounce, and they’re back to falling and at steeper rate then the last serious decline in late 2014. 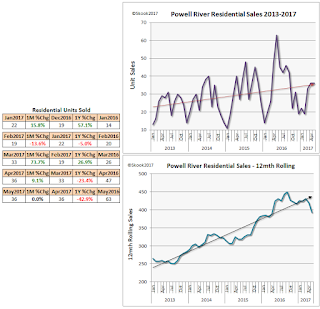 (To enlarge, right click on image and choose open in new tab or window)

The residential average sales price reached a zenith in October 2016 ($347,714) and doesn’t appear too interested in equalling or surpassing the mark. 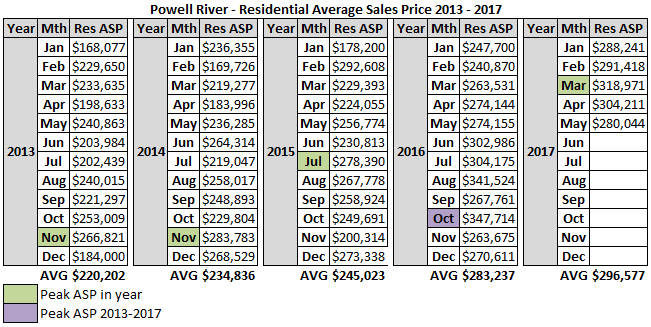 The 12-month rolling ASP chart shows the trend has been ever upward. That is until this April and May when it went flat. 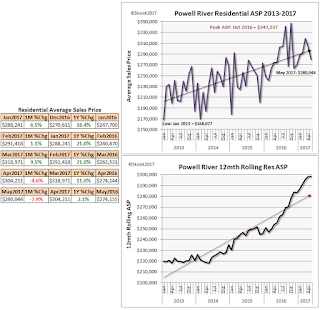 (To enlarge, right click and choose open in new tab or window)

Now, are Average Sales Prices going to pick up again? Maybe not. The number of Active Listings jumped 16.8% and appears to be gathering momentum. It’s highly possible investment properties bought in 2014/2015 are coming back on the market - they are on the lower Sunshine Coast. This will be a chart to watch. 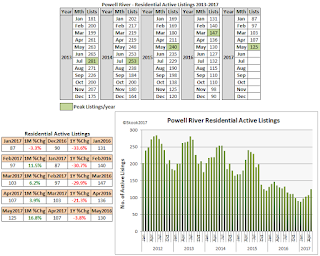 Powell River remains a Buyer’s Market in 2017 according to the Sales-to-Active Listing Ratio. However, if sales are falling and more listing get thrown on the market this could change quickly. 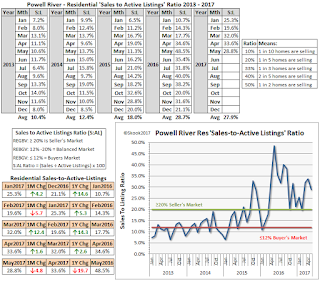 (To enlarge, right click and choose open in new tab or window)

June stats will be critical in determining if the party is over in Powell River. The BCREA will release them July 14th. Stay tuned.
Posted by Skook at 2:26 pm

Email ThisBlogThis!Share to TwitterShare to FacebookShare to Pinterest
Labels: PR - 2017 RE Sales Stats